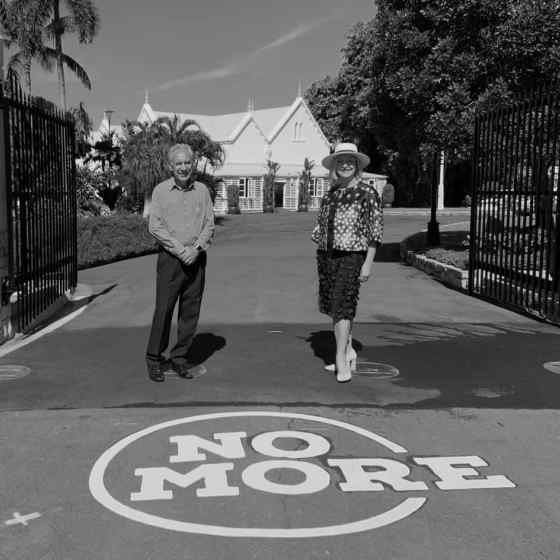 On 19 May 2020 as part of Australia’s Domestic Violence Awareness Month, NO MORE founder Charlie King met with Her Honour the Honourable Vicki O’Halloran AO, Administrator of the Northern Territory at Government House in Darwin.

Charlie and Her Honour posed for a photo in the driveway in front of a NO MORE logo placed for all to see as they walk past or visit. Following the photo Charlie and Her Honour spent time discussing Her Honour’s role as the Administrator and the work NO MORE does to reduce domestic and family violence in the Territory.

The discussion turned to the incidence of violence in the Northern Territory, with more than 10 reported assaults per day just in the NT townships, there is still much work to do in reducing domestic and family violence in the Territory.  Of these 10 incidences a day, 9 involve alcohol and the two spent some time discussing how and why some people choose to use violence, which is never acceptable.

Charlie was pleasantly surprised at Her Honour’s knowledge of NO MORE’s work and history and thought it was wonderful that Her Honour had even used the term NO MORE with a group she saw who were fighting and drinking on the cliffs of the Esplanade. She sees this group regularly and they are normally happy and friendly with each other, so she felt saying NO MORE was the right thing to do. She was pleased that they knew exactly what she meant, and it was all she needed to say in that moment.

Her Honour made a generous offer to continue to support the work NO MORE does, with thoughts of opening her beautiful home to NO MORE supporters or wearing our NO MORE badge. NO MORE is very appreciative of this support as the Administrator has already shown she can be a powerful voice in our campaign to end domestic and family violence in the Territory.