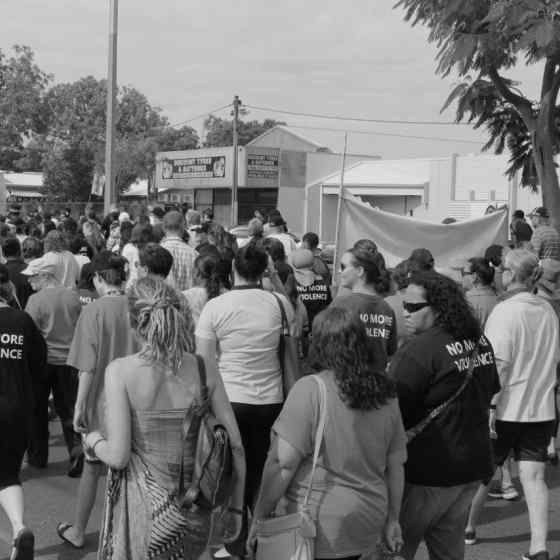 On Friday, 24 November, over 400 people marched down the main street of Tennant Creek with one clear message: no more violence.

Organised by NO MORE Campaign Founder Charlie King OAM and Project Worker Elliot McAdam AM, the march was a sign to the community, to decision-makers and to the rest of the Northern Territory that enough is enough.

The march began at the north end of Paterson Street and concluded at Peko Park, where march participants came together with community elders, politicians, police, school students and prisoners to launch the NO MORE violence program in Tennant Creek.

Charlie King said that the strong turn out really showed the community’s desire to end violence in the community.

“The march gives us a good base to drive the NO MORE violence program in the Barkly region in the hope that we can engage people to take a stand, work together and stop hurting each other,” Mr King said.

“Violence in our community is a sad fact, but it’s happening everywhere and to everyone, and there’s no hiding from it.”

“It must be addressed, and it must be stopped, so it’s up to us as individuals to come together and say NO MORE violence.”

Ross Jagamara Williams gave an impassioned speech that detailed the Tennant Creek community’s history of standing up against injustice and righting the wrongs, with the town being the first in Australia to establish a night patrol, as well as establishing the country’s first grog free day and leading the way for alcohol management plans.

“The challenges remain but we keep surviving,” Mr Williams said.

“We as a community did it before. We can do it again. We did it because we worked together,” he said.

Mayor Steve Edgington was impressed with how many people had turned up to the march to demonstrate NO MORE and that 'enough is enough'.

However, he stressed that recent statistics, which show a 40% increase in domestic violence related assaults in the Barkly in the last 12 months, highlight a problem that is ongoing and needs to be addressed from all sections of the community.

“The Barkly Regional Council is committed to partnering with CatholicCare NT and the NO MORE Campaign to reduce family and domestic violence throughout Tennant Creek and the entire Barkly region,” Mayor Edgington said.

“We’ve had enough of our community being destroyed by violence, so by forming this partnership we can work together to end family violence in the Barkly region.”

“It’s our job in the community to lead by example and do everything that we can to reduce violence in our community,” he said.

Rekeisha Taylor, a student from Tennant Creek High School, alongside fellow students Brooke Wilson and Layla Dowling, also gave a speech that thanked the community for coming together to stop the violence and pain for future generations.

Elliot McAdam said the march would not have been possible without the support of the Barkly Regional Council and other organisations in the community.

“The community came together and linked up to show everyone that we can challenge family violence in our community,” Mr McAdam said.

“We can challenge all forms of violence in our community and end it once and for all.”