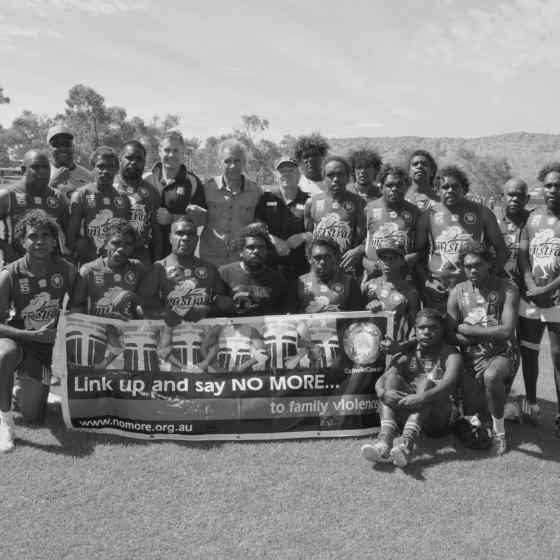 While the NO MORE campaign has been kicking goals around Darwin and the other metropolitan cities around Australia, we have not forgotten our roots. The original consultation with Indigenous Central Australians that formed the basis of the NO MORE campaign has defined the campaign's direction and actions. As such, the trip to Alice Springs for the Easter Lightening Carnival 2015 was like returning home.

The carnival was a great weekend of exciting, skilful and physical footy. With teams from all across Central Australia competing at Traeger Park, the atmosphere was loud and entertaining.

Amidst this excitement, nine teams found the time to talk with Charlie King about family violence in their communities and how their footy clubs can become community leaders. The talks led to the beginnings of draft Domestic Violence Action Plans for the community football teams, and the offer of large grants for communities that take active steps to reduce family violence.

As part of this collaboration, NO MORE has formed new links with the NT Police and the Central Australian Football League. The campaign is looking forward to working together with these groups in the identified remote communities to help reduce family violence. Collaborations like this are essential for any meaningful change to occur, as the issue of family violence is large and varied and needs different approaches from different angles to be resolved.

The NO MORE campaign would like to extend its thanks to the Central Australian Football League, the NT Police and the teams involved for taking a stand against domestic violence. The NO MORE campaign looks forward to going remote again and working with communities to reduce the violence.