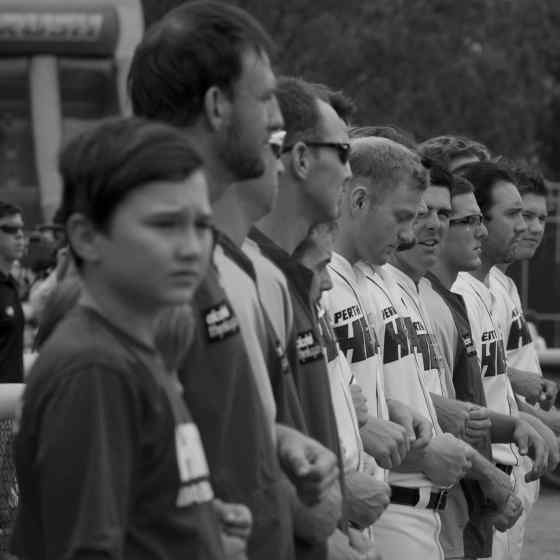 The Australian Baseball League and its member Clubs will throw their support behind the NO MORE Campaign this Friday 6 January, 2017 at Ballparks around Australia.

The NO MORE Campaign has been instrumental in changing the culture of domestic violence in the Northern Territory through sport. Targeted initially towards indigenous men, the campaign has grown and the ABL is proud to be the first national sporting competition to throw its support behind the initiative.

ABL fans will be invited to link arms with fellow supporters before each game on Friday night, with players from both teams and game umpires doing the same.

ABL fans will also have the chance to post their own messages of support on social media using the hashtags #BreakTheCycle and #NOMORE.

NO MORE founder and well-known ABC Darwin Sports Commentator Charlie King will address the playing group ahead of the Perth Heat v Canberra Cavalry series in Perth this Friday night. King will also throw the first pitch and be invited to do a guest stint on the live streaming commentary for ABLtv.com

The NO MORE game also coincides with the start of the Youth and Senior Women's National Championships being held in Canberra (10-17 January). Importantly, it sends a strong message of support to the Australian women's baseball community not only as mothers, daughters, partners and wives; but as baseball players, coaches, umpires, volunteers and administrators.