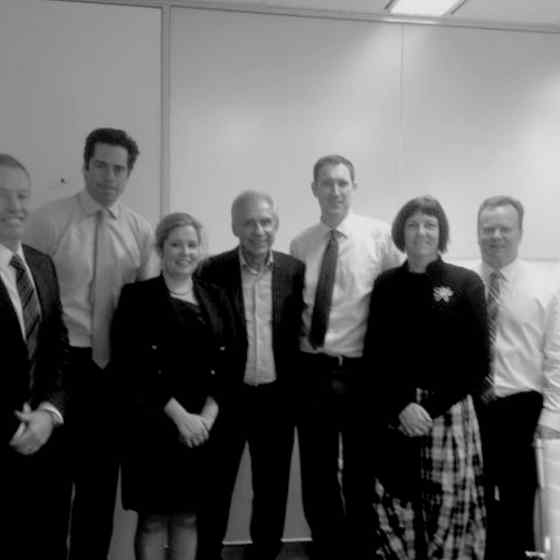 On 17 June, CEOs from the major sporting leagues in Australia gathered in Sydney to discuss the overall development of sport in Australia. Asked to present on the importance of sport in domestic and family violence prevention by the Department of the Prime Minister and Cabinet, Charlie King gave a presentation to the CEOs at the meeting. This is an important milestone as the NO MORE campaign gains national recognition and influence – creating the opportunity to involve more sporting clubs in reducing family and domestic violence.

The members present at the meeting included (picture left to right): Craig Tiley, CEO of Tennis Australia; Gillon McLachlan, CEO of the AFL; Josephine Cashman from the Prime Minister’s Indigenous Advisory Council; NO MORE campaigner Charlie King; James Sutherland, CEO of Cricket Australia; Kate Palmer, CEO of Netball Australia; Bill Pulver, CEO of the ARU; and Malcolm Speed, Chair of the group and former CEO of the ICC.  David Gallop, CEO of the Football Federation Australia was also in attendance. David Smith from Australian Rugby League was unable to attend due to State of Origin commitments.

Forming these connections is an important part in engaging the elite level sporting community. By engaging at both the grassroots and elite level, the campaign hopes to be able to reach all members of the Australian community.

As part of this ongoing national presence, the Melbourne Demons linked arms with the West Coast Eagles at TIO stadium last Saturday (4th July). The linking of arms is a symbolic gesture taken from remote Central Australian Indigenous Elders, to show that men who link up all work together to stop violence, wherever they are. The Territory Thunder and Brisbane Lions Reserve side joined them in linking arms in the curtain raiser. Congratulations to the clubs and their supporters for taking a stand against family and domestic violence.