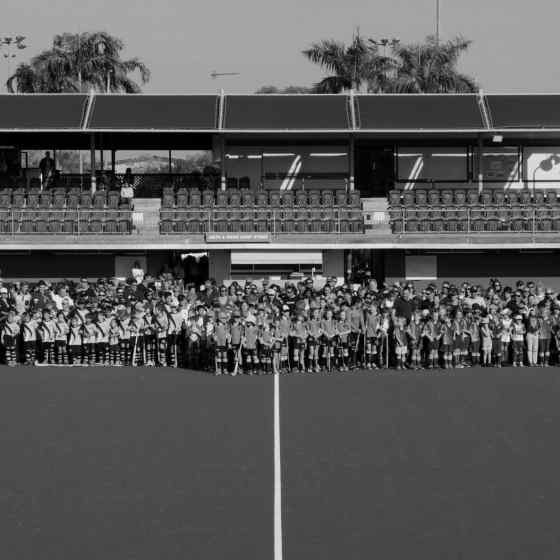 Darwin Hockey Association (DHA) and Hockey NT linked up with the NO MORE Campaign and launched their involvement in a family day event on 6 August 2016. Three hundred and sixty five people, one for every day of the year, linked up to symbolically show that the hockey community says NO MORE to family violence.

Deb Jones, Darwin Hockey Association Secretary said she was proud of hockey’s commitment to working with the NO MORE Campaign.

“Whole families came down to the field. It gave me goose bumps to see that many people from the hockey community participate. They were really engaged with it and it was a no brainer from DHA’s perspective to get involved,” said Jones.

Tarn Jong, under 13 NT Girls team manager, said it was great to see hockey standing up for all the children that play.

“It is fantastic to see. You may be the voice that they need or the support that they need when they see violence happen. By taking stand, we are showing our kids that it’s not acceptable anywhere, not just in hockey,” said Jong.

NO MORE Campaign Founder Charlie King was elated to see how many people got involved.

“It was amazing to see 365 people out there on the ground all linking arms. This was the first time any sport had that significant a number all linking up to say NO MORE to family violence. We congratulate the hockey community on such an achievement,” said King.

After the successful launch earlier this month, the NO MORE Campaign will continue to work with DHA and each individual club to develop a Domestic Violence Action Plan. Each club will design their own plan outlining what they aim to achieve in reducing family violence. One component of the plan will include an education session with club members about the causes and effects of family violence.

We look forward to continuing to work with the hockey family.