Djarrak Football Club link with the NO MORE Campaign 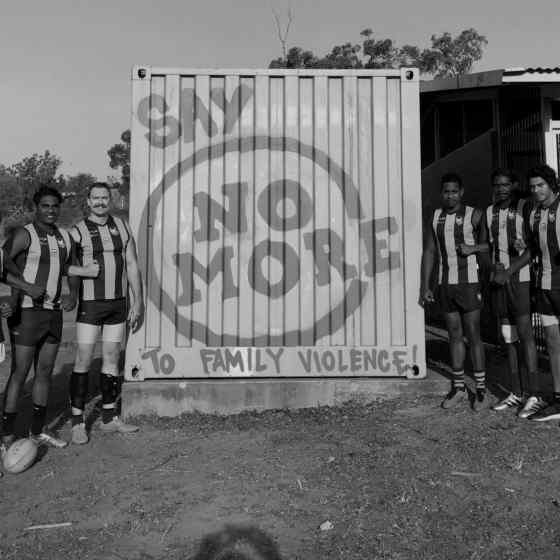 In a monumental day for Djarrak Football Club, and the wider Rirratjingu Football Program, our organisation has developed and committed to saying NO MORE to family violence. With the help and support of Charlie King and Alex Billeter from the NO MORE Campaign, Djarrak Football Club are the first Gove AFL team to develop a Domestic Violence Action Plan.

Both Charlie and Alex visited our club today and shared a history and background of the NO MORE Campaign, since small beginnings in the Western Desert in 2006 through to the strong voice and movement that we identify today. Charlie explained how the phrases 'Link Up' and 'No More' were coined. Alex was able to share some of the work that other sporting clubs had developed to date and we feel that this was a logical step to take with Djarrak Football Club striving towards 'Better People make Better Players'.

We were fortunate to have Nicholas O'Riley, Remote Development Manger - AFL NT, in attendance. AFL NT through the NTFL has made a huge move by requiring clubs to develop DVAP's for inclusion in competition. This is a massive undertaking and signals the wider NT football community that family and domestic violence won't be tolerated.

Brendan Marika represented our player group today. He will address the Rirratjingu Football Program squad at training tomorrow to communicate what the outcome of today means for our club moving forward. Brendan will address the group in Yolngu Matha. We don't want this issue to be lost in translation and are determined that every member understands what a DVAP is and how the DVAP will shape our program going forward.

Today we learned the horrifying statistic that the nation is approaching close to 2 women killed nearly every week at the hands of a partner or ex-partner. Family violence is a community problem that requires a community wide response. We have discussed family violence as a group for the past 18 months. The action our club has taken today is a continuation of discussing how we treat the women and children in our lives with respect.

Djarrak Football Club would like to see women's and junior teams wearing our colours as early as next year. We recognise that today is an important step in opening our program as a club that our mothers, sisters and daughters would like to participate in from a competetive perspective.

This Friday, 25 November is the United Nations International Day for the Elimination of Violence against Women and our major sponsor the Rirratjingu Aboriginal Corporation are holding it's second White Ribbon Dinner. Last year this event raised a significant amount for the NO MORE Campaign and the White Ribbon Organisation. The NO MORE Campaign deliver activities here in Yirrkala and across the country. The White Ribbon Organisation are powerful advocates on the national stage. Some important announcements will be made at the event including the finalisation of our DVAP. Charlie King will host proceedings.

The dinner will take place on the lawns at the Walkabout Lodge from 7pm.