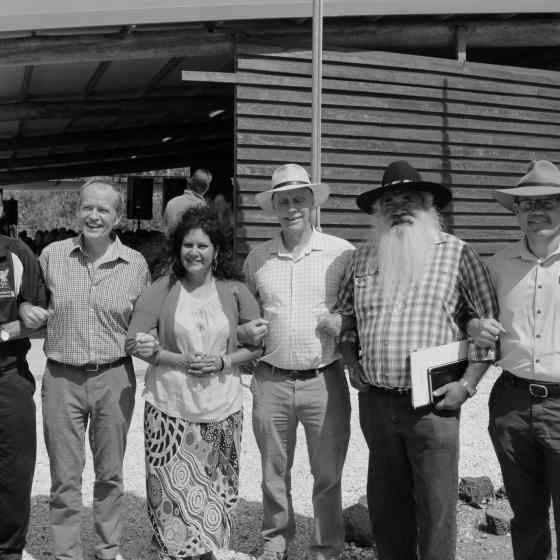 "Let's all speak up. Let's all be brave!" the kids of Elcho Island sang as they led a march through the streets of Galiwin'ku that elders hope will be a turning point in the remote community's struggle against domestic violence.

They wrote their own song of defiance and hope, and sang it so loud it was heard by those men who were reluctant to join them, women, elders and traditional owners as they made history on Tuesday on the island, 550 kilometres north-east of Darwin.

Community leader Helen Nyomba expressed the cautious optimism that the "No More" march would represent a turning point in their struggle against what NT coroner Greg Cavanagh has dubbed the "contagion" of domestic violence in Aboriginal communities, one that leaves Indigenous women 34 times more likely to be hospitalised as a result of family violence – and 11 times more likely to die.

"This is a message coming to the community, to the families, to the clans," the 54-year-old mother and grandmother told Fairfax Media.

"It's a message I'd like to see right across Australia."

Aboriginal lawyers, leaders and academics have appealed directly to Malcolm Turnbull and Bill Shorten to make this a reality by leading the push and linking arms with all MPs at the national Parliament to say "No More" to domestic violence.

They have also asked that a network of Indigenous leaders be included when family and community violence and soaring Indigenous incarceration rates are discussed at this month's meeting of the Council of Australian Governments.

While Mr Turnbull has promised a prompt response, Mr Shorten has endorsed the idea as a "worthy proposal".

"My office will be in contact with you to discuss how this could work in practice. I will also write to the Prime Minister and encourage him to join me in supporting this campaign," Mr Shorten replied.

Mr Cavanagh addressed the scale of the crisis in his findings into the deaths of two women in Alice Springs last month, saying the criminal justice system failed to protect women from domestic violence.

"That is to say, policing and punitive sentences do not provide an answer to stopping the violence," he said.

The "No More" campaign has been driven by Gurindji man and child protection worker turned ABC broadcaster Charlie King, who attended Tuesday's march at Galiwin'ku and addressed footballers before they linked arms in support of the campaign before an exhibition game.

The aim is to put the onus on men to stand up, take ownership of the problem and stop violence.

The campaign is being strongly backed by Josephine Cashman, a member of the Prime Minister's Indigenous Advisory Council, and one of the country's highest-profile advocates, Professor Marcia Langton, who co-signed the request to Mr Turnbull and Mr Shorten with Mr King.

NT policeman Steve Martin said the "No More" campaign had been embraced by communities including Maningrida, Ramingining, the Tiwi Islands, Wadeye, Yuendumu and Yirrkala in the past 18 months and was making a difference.

"We have seen reductions in domestic violence rates in just about all of the communities where 'No More' has been launched and sustained by strong men and women in those communities," said the acting superintendent, who runs the community engagement program of the NT police.

"This is about local people standing up to say no more to domestic violence and they're doing a great job."

Galiwin'ku is the largest community on Elcho Island, 150 kilometres north-west of Nhulunbuy. It has a population of more than 2000, with 44 per cent aged under 20.

While there can be no doubting the scale of the challenge or the devastation and heartache it has caused, the message from the school children at Galiwin'ku could hardly have been more emphatic.

Admitting there were times when they were afraid and did not feel safe, they expressed optimism so long as communities rose up together.

"If we stand together we can win this war," they sang. "Now is the time for us all to say, 'No More.'

Article from The Age, Michael Gordon