NT Cricket strengthens its relationship with the NO MORE Campaign 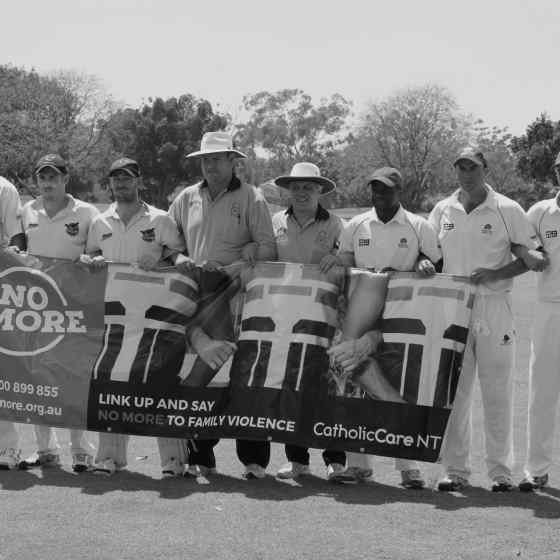 NT Cricket and the NO MORE Campaign continue to strengthen their partnership with the announcement that NT Cricket Club and Facility Development Funding is linked to clubs completing a Domestic Violence Action Plan (DVAP) as part of funding requirements.

NT Cricket has partnered with the NO MORE Campaign during dedicated cricket rounds, a linking of arms prior to the start of cricket matches throughout the Northern Territory and a strong alignment with the annual Imparja Cup and National Indigenous Cricket Championships in Alice Springs.

The 2017 Community Cricket Carnival program will also incorporate a linking of arms to highlight the NO MORE family violence message in communities across the Territory.

NO MORE Campaign Founder Charlie King is proud to see another NT peak sporting body incorporate DVAPs into their funding agreements with clubs.

“AFLNT lead the way last year by writing DVAPs into the licensing agreement with all of the NTFL clubs.

“We have had a strong relationship with NT Cricket and this is the next stage of developing that relationship.

“We want to congratulate Palmerston Cricket Club on being the first cricket club in Australia to develop their DVAP.

“The importance of clubs having DVAPs has been seen across several different codes that we work with; Nightcliff FC and the Parramatta Eels both had incidents that happened this year and both clubs took a strong stand in dealing with those incidents.

“Incidents of family violence that may have previously been not talked about in sport, are now being talked about openly allowing people to seek support and the teams to work with the individuals,” said King.

NT Cricket CEO Troy Watson is a proud supporter of the NO MORE Campaign and firmly believes that sport is a powerful vehicle to raise awareness about family violence in our community.

“We have implemented a number of NO MORE initiatives at the annual Imparja Cup and National Indigenous Cricket Championships in Alice Springs, and the inclusion of the Domestic Violence Action Plan into the requirements to access the Club and Facility Development Fund is the next step in integrating a club culture of standing up and saying NO MORE to family violence.

“It is great to see that Palmerston Cricket Club have completed their DVAP ahead of the start of the season and I look forward to receiving plans from all clubs.

“I would encourage all sports to join us in supporting this very important message,” said Watson.