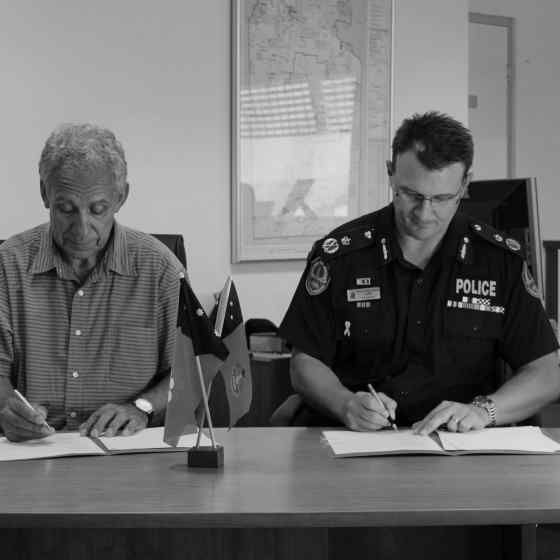 Commissioner and Chief Executive Officer of the Northern Territory Police, Fire and Emergency Services (NTPFES), Reece Kershaw, today signed a memorandum of understanding on behalf of the Agency with CatholicCare NT’s NO MORE Campaign, which builds on the existing informal agreements the two parties.

NO MORE Campaign Founder Charlie King said the agreement was a special moment which would make a tangible difference to those affected.

"To formalise the relationship between the NO MORE Campaign and the Police has always been a good one, but formalising allows us to share information, share some resources as well and to tackle head on the problems our communities are facing; not just those remote communities but the communities in town," Mr King said.

“Our Agency has been working with the NO MORE Campaign and their founder Charlie King to establish Domestic Violence Action Plans in communities right across the Northern Territory.

“This MoU signifies our ongoing commitment to the thousands of people – often women and children – affected by family violence every year, particularly in remote communities. NTPFES and CatholicCare NT will work together to provide continued support to these communities through personnel and relevant resources.

“This MoU will be considered a success once family and domestic violence no longer exists in the communities.”