Prime Minister's Address to the House of Representatives 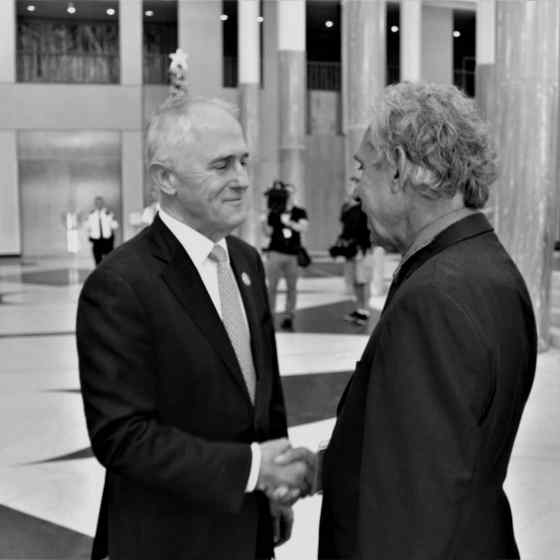 Mr Speaker, I move that the Parliament acknowledge that violence against women is a national issue that requires a whole of community response.

Call on all men to take action, call out violence, link arms and say ‘no more’ to domestic violence.

Stand united in its commitment to eliminate violence against women.

Mr Speaker, today I ask all members to get behind the ‘No More’ campaign.

I acknowledge the Ngunuwal people and I thank Tyronne Bell for his welcome to country this morning.

I acknowledge the Rirratjingu people in the chamber today, especially the Chairman of The Rirratjingu Aboriginal Corporation Mr Bakamumu Marika and all Rirratjingu men and women from Arnhem Land who have flown to Canberra to share their message with all Australians.

Thank you LakLak Marika and your sister Kathy Marika, who led the Djan'kawu ceremony - the story of two sisters - a story of creation.

Your dance brings a message from the beginning of time, a message of love, a message of respect, a call to men to respect women – the mothers who gave them life, the wives who give their children life. The sisters who carry their culture through thousands and thousands of years, from time out of mind.

Your dance is more powerful than the words we can speak here. You’re using the strength of your culture to seek to stop this violence. You are using the power of your dance, your tradition, your culture to communicate our need, our duty to respect women.

As a Parliament, and as a nation, we no longer avert our gaze from the horror and the shame that is domestic violence - we look clear eyed at this appalling failure and we are resolved to stop it.

It is the strong women who talk bravely about their tragic personal experiences, who help us confront the shocking realities of the crimes against them.

Nationally, Aboriginal and Torres Strait Islander women are hospitalised for family violence-related assaults at over 30 times the rate of non-Indigenous women.

We can and we must do better.

Charlie King founded the ‘No More’ campaign - a simple message that sprung from within communities and has since spread from community to community. And by simply saying: ‘enough’, ‘no more’ we draw a line in the sand and stand up for the women and children who have the right to be safe.

As Charlie said this morning in the forecourt, his campaign was inspired by the old men in the Western Desert who said “no more, no more”.

They recognised that this was an issue for men to own, to take responsibility for and to stop.

And they recognised we must do it together - so we say, “no more” and we link arms showing we are united.

It is a team effort, so Charlie works with sporting clubs, encouraging coaches to drop players who abuse their partners as a recognition of their failure, and an admonishment of their failure to live up to the values of their community.

In Arnhem Land, they have reduced domestic and family violence by 27.9 per cent in one year, by adopting the ‘no more’ principles, which have at their heart the respect for women that we must uphold.

According to Charlie, ‘sport is the embodiment of fairness and equality and family violence is a clear violation of those ideals’.

We know that fairness and equality come from respect.

These values are communicated in our Domestic Violence Action Plan - an important statement of both intent and action that helps sporting clubs take a stand against domestic violence.

Charlie’s ‘no more’ campaign says no more to violence, no more to the disrespect from which it springs.

There is a big cultural change underway, driven by awareness, amplified by leadership and campaigns like “no more” and indeed, “stop it at the start”.

And all of us recognising that this cultural shift starts at home - ensuring our sons and grandsons respect the women in their lives, starting with their mothers and their sisters.

But while long term change is vital, so is urgent action.

On Friday - White Ribbon Day - there were reports of 16 incidents of domestic violence in the Northern Territory alone. In one of those incidents, a woman’s jaw was broken.

Now domestic and family violence is preventable. We all have a part to play, all levels of government, all leaders – we must work together to provide the prevention, the strong safety and security measures, and the penalties for those who commit this crime.

We fail victims of domestic violence if we do not talk about the reason some people are imprisoned.

To stop incarceration, we need to stop the violence.

The Cashless Debit Card operating in Ceduna and the East Kimberley, is a practical measure that is reducing violence.

The number of domestic violence incidence reports received in July this year was 13 per cent lower compared to April 2016 in Kununurra.

As the Aboriginal leader, Ian Trust, said, "Unlike other reform efforts undertaken by government, it has been the Indigenous leaders of the East Kimberley who have led this reform”.

Doing things with Aboriginal and Torres Strait Islander people, not doing things to them, as Chris Sarra so wisely observed and as I have so often quoted.

Our specialist domestic violence unit and health justice partnerships are on the front line - working to reduce violence. Women can access the services needed in domestic and family violence, family law, discrimination, victims of crime, child protection and housing issues.

The Women’s Safety Package that I announced in 2015 provided $3.6 million for the Cross Border Domestic Violence Intelligence Desk.

This helps police protect victims and hold perpetrators to account across the Western Australia, Northern Territory and South Australian borders - where I was earlier this month in the Anangu Pitjantjatjara Yankunytjatjara Lands, the APY Lands.

By working together, 14 ‘high risk’ offenders were tracked across jurisdictions between January and June 2016. Of the 14 offenders, 13 were arrested and have been processed, convicted or are currently before the courts.

This morning, members of this House and the Senate were prepared to put aside our differences on politics and policy to create a moment of unity—a wall of humanity that showed the victims of domestic and family violence that we have heard their cries for help and we say with Charlie and thousands of others, ‘no more’.

We ask all Australians to join with us and with our Aboriginal and Torres Strait Islander brothers and sisters and say again, as Charlie King has shown us and has taught us and has led us: Enough—‘No More, No More’.