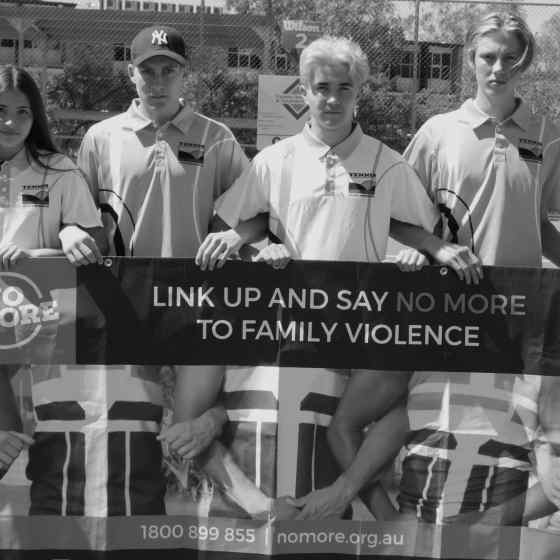 Tennis Alice Springs has joined forces with the NO MORE Campaign to help raise awareness about family violence, by making a commitment to implement and develop its own Family Violence Action Plan.

The Action Plan will involve campaign promotion through signage at the sport’s Gap Road headquarters, and distribution of domestic violence awareness, education and service delivery information to its participants.

Tennis Alice Springs Manager and 2015 NT Sports Coach of the Year Matt Roberts says the decision to support the NO MORE message was an easy one to make.

“We didn’t hesitate when we were approached. It was an easy decision to make for a family based club like ours.

“At our club we already promote healthy attitudes on and off the court, and it will also help raise awareness of the important NO MORE Campaign,” said Roberts.

Local NO MORE Campaign worker Stan Coombe said the commitment by Tennis Alice Springs was a significant one for the campaign locally, which up until now had focused on getting the region’s AFL clubs on board.

“It has been a busy 12-month effort to get 15 AFL clubs from right across the region to commit to club Action Plans,” said Coombe.

“This opportunity to now get another sporting code on board is one that we hope inspires the administrators of other local sports to follow suit.”

“Every sports club and code has the ability to positively influence the social attitudes of their participants, and even their supporters.”