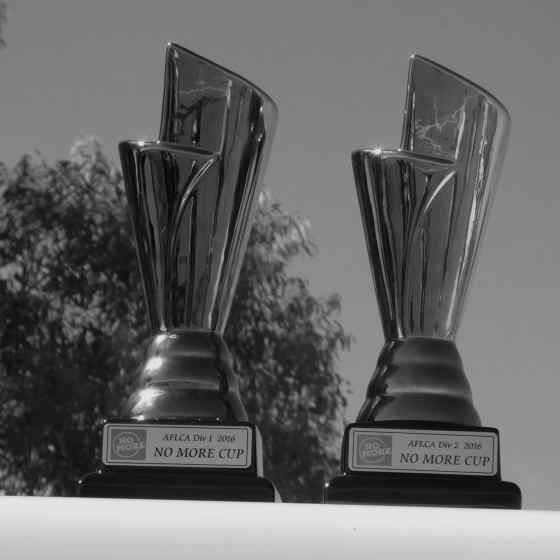 It was a historic day for local football in Central Australia on Sunday (June 5) with the first ever AFLCA competition games played at Ti Tree, with Division 1 and 2 clubs vying for the NO MORE Cup in each division.

The Highwaymen maintained a narrow lead throughout most of the first three terms but couldn’t hold on against the fast finishing Roosters.

Captain Wayne Scrutton jnr and Harold Haines lifted the Roosters over the line with inspirational second half efforts in the midfield, while Kurt Abbott put on a classy all-round display.

Plenty Highway Captain and former NT Thunder player Tosh Kunoth was at his brilliant best throughout with several trademark scintillating runs and a mark of the year contender, taken while standing on an opponent’s shoulders in front of the big crowd on the scoreboard wing.

Scrutton epitomized the NO MORE spirit of the occasion by calling both sides into a circle in the middle of the ground at the end of the game and reinforcing the sportsmanship that had prevailed throughout the day.

He then duly accepted the NO MORE Cup as both sides mingled together at the presentation.

Early in the day Mulga Bore leadership signed a commitment to work alongside NO MORE to develop an in-house club Family Violence Action Plan, becoming the ninth AFLCA affiliated club to make such a commitment and 11th overall in the Central and Barkly districts.

They duly celebrated that commitment by taking out the Division 2 NO MORE Cup after a thrilling two point win over the Laramba Cowboys, 13-8 (86) to 13-6 (84).

After a late start due to Laramba’s team bus suffering a blown tyre, this game had the crowd on the edge of their seats right until the very end with two lead changes inside the last minute.

Tristan James played outstandingly for Mulga Bore and Shane Dixon likewise for Laramba, and while the Cowboys may have lost the game they look like they have unearthed a star of the future.

Thirteen year old Joshua Tilmouth showed maturity well beyond his years in senior company with a polished display as a small forward that included a goal of the year contender, courtesy of an outrageous soccer off the ground from the boundary line deep in the pocket.

The Central Desert Regional Council and local volunteers did a tremendous job to have the dirt surface ground and surrounds, visible from the North Stuart Highway, in great condition.

As well as attracting  a strong crowd of locals and supporters from the three visiting communities, the spectacle also caught the attention of tourists travelling along the highway with several campervans and caravans pulling in and staying for a quarter or two of the fast paced action.