Time we listened to a familiar voice 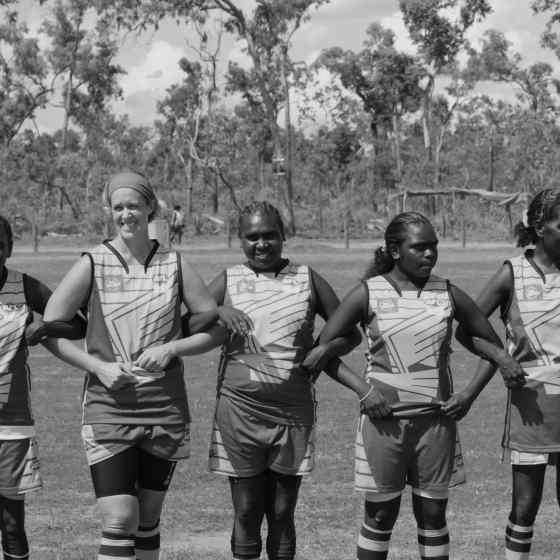 There’s probably no voice in the Northern Territory as familiar  as  Charlie   King’s.   For more than two decades, King has provided the soundtrack to our wet-season weekends, calling the footy for the ABC.

Every Saturday and Sunday he’s there. In the  background on the way to Bunnings; a handy distraction  in the backyard as we put off mowing the lawn. But there’s one place where King’s voice has  struggled  to be heard. For eight years he’s been lobbying politicians in Canberra to help fight a battle far bigger than  any he’s seen on a football field.

Last month much of the nation was shocked when Police Commissioner Reece Kershaw revealed NT police had received 75,000 reports of family violence in the  past  three years. More than 80 per cent of these cases involved Aboriginal people. But it was no shock to Charlie King.

He’s been working at the coalface of this issue  since 2008, trying to inspire com- munity-led  action  to  combat the violence. King’s  inspiration  came from a group of elders in a remote community  on the edge of the desert, west of Alice Springs.

He waves his finger as he tells of their response to the growing levels of violence.

“They would look me in the eye and say ‘no more, no more’,” King says.

In this moment a campaign was born. King has spent much of the past eight years travelling across the Territory trying to spread  the  message  of the No More movement, encouraging people to link arms in a symbolic gesture that says they will come together  to beat the curse of family violence.

“It grew a life of its own,” he says. “Men simply did it and they  did  it  without  having  a discussion about it.” But it was more than just symbolism. Word soon flowed back to King from the police that  rates of violence dropped in the days after these events.

The campaign started with football teams, but it’s now spread to entire communities. Ten days ago, hundreds turned out for a No More march on Elcho Island. Men, women and children walking  together  in  a  united stand against family violence.

As he walks through Darwin’s Civic Park, King’s phone rings. It’s a community member from Milingimbi. They’ve heard the No More campaign has been to Galiwin- ku  and  want  to  know  when King can come to their community.

King often receives these requests. Too often he has to say no. The NO MORE Campaign receives no funding from the Northern Territory Government and just a trickle from Canberra, distributed through CatholicCare NT. That money funds two staff in Alice Springs and  King, who  gets  paid  for one day’s work a week, though he  can’t   remember   the   last time that contribution was limited to eight hours.

King   has   learnt   how   to stretch  every  dollar,  hitching rides on light planes with the police  or  the  corrections  department.  But he says he has had   many   a  sleepless  night worrying about the communities he hasn’t been able to help. “What a horrible situation it is for us that we have to make up our minds on which (community) we go to,” he says.

“And it’s usually an economic decision in the end. You go to the one that you can get there the cheapest. How unfair that  is to the women and the men and the children that get abused in the communities  even further out.”

Two days after he became Prime Minister, Malcolm Turnbull announced $100 million in funding to combat domestic violence, however none has gone to the NO MORE Campaign.

But for King, it’s not just about  money. He has lobbied every prime minister since Kevin Rudd. Last year he finally had a breakthrough – Tony Abbott and Bill Shorten  offering bipartisan support for all federal MPs to link arms in the parliament.  A gesture  King says would have given national attention to the  issue and  in- spirations to those in the Territory’s remote communities. “It got really close,” he says. “A lot of work was done. At the time the Prime Minister was Mr Abbott and he was pretty keen to see it happen and then, of course, he lost his position as the  Prime  Minister  and  then things all changed and it didn’t get going again.”

A recent coronial report into the deaths of two women in Alice Springs and the shock- ing police statistics have seen this issue draw national  attention in the past month.

While King is critical of some of the commentary, he says there  is now an appetite for change. He has backed calls for the Prime Minister to visit Alice Springs. There,  King says, he will see for himself both the level of violence and the Aboriginal people who are desperate  to  do something about it.

He says if the Government still doesn’t want to fund the work they are doing, he should tell them himself.

“How can the Prime Minister look at them and say ‘I can hear what you’re saying, I hear your call saying stop the viol- ence, but sorry, we can’t fund it’. He needs to see that. This is a real human tragedy.”

Despite his shoestring  bud- get, King is still making in- roads. Last year he helped return football to Ramingining. The local competition had been suspended for eight years after a series of violent incidents. As part of its return, the players drew up a domestic violence action plan. It was mandated  that  women  be part  of the  competition,  not  just through their own women’s league, but also in the administration  of the men’s competition.

“They reduced  family violence by 70 per cent,” King says. “ To this  day  the  community has just reinvented  itself and family violence is such a small part of it now because they know what life is like without the violence.”

He tells a similar story about Wadeye, and announces with pride that  all AFLNT clubs must have a domestic violence plan in place by December 1 this year.

KING HAD something of a breakthrough this week. On Friday, Opposition  Leader Bill Shorten wrote to Malcolm Turnbull  urging  him  to  reignite the national NO MORE Campaign.

The Prime Minister’s office says Mr Turnbull is supportive and  is working  out  how  best that can be done.

Today, King will be back behind  the  microphone.  His voice providing that familiar comfort to another  lazy weekend. Some of us will hang  on his every word. Thankfully, it seems some of our politicians are starting to listen too.