An Unlikely Link Up: The NO MORE Family Violence Social Motorbike Ride 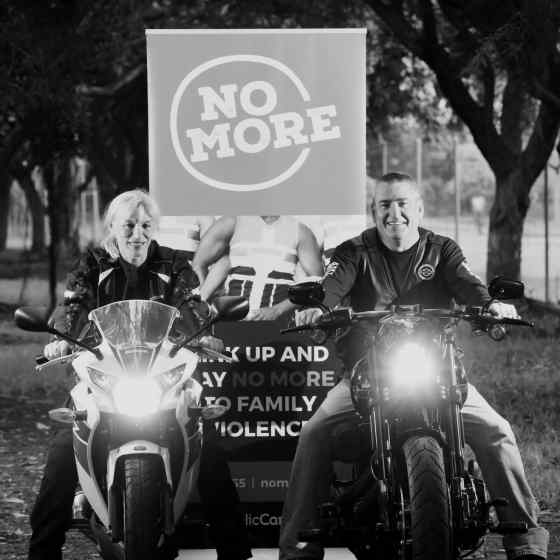 On Sunday, 15 January 2017, over 180 bikes of all shapes and sizes from many motorcycle clubs in Darwin gathered together to ride through Darwin and say NO MORE to family violence.

Lead by the NT Women’s Motorcycle Group, the riders took off from the Darwin PCYC, rode through the Darwin CBD, and finished at the Nightcliff Oval, where the riders linked arms together with players from the Nightcliff and Waratah Football clubs, along with umpires, officials, politicians and community groups.

Marguerite Bowen from the NT Women Motorcyle Riders organised the ride to show the Darwin community that family violence is an issue that transcends all groups, all ages and all parts of the community.

“I thought it was a good idea to involve another part of the community to show support for the NO MORE campaign,” Marguerite explained.

“Being a member of NT Women Motorcyle Riders, it gives me great pleasure and privilege to represent the group and to represent Charlie King’s campaign to give support to the very important issues to break the cycle of domestic violence.”

Jeff Borella, President of the Nightcliff Football Club, was also proud to support the link up event, and said that it was important for these issues to have support from all groups in the community, especially from other football clubs.

“Football, as you know, goes right round the community, so I think this is a great platform to promote the NO MORE campaign,” Jeff said.

“It will filter all along; we have to lead by example, so that’s what we’re doing here today.”

The Nightcliff Football Club has a long history of supporting the NO MORE campaign, and was the first football club in Darwin to write a domestic violence action plan (DVAP).

“We actually started to do something with our football club quite a few years ago. We had an incident, and we did something about it.

“That’s what other clubs have got to embrace with their domestic violence action plans is to actually implement it and make sure they do something about it to stop it.”

Jeff has a simple message to the community about family violence.