When will we say NO MORE to family violence? 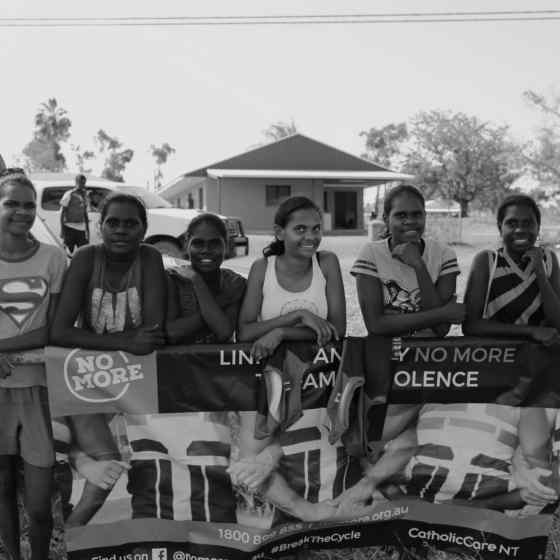 It was a little thing that grew: an idea that might, just might, have had a profound impact on the great Australian shame of family violence in remote Indigenous communities. Instead, it's a metaphor for policy failure on a grand scale.

It sprang from old Aboriginal men, sitting on the red dirt of the central western desert, when Charlie King, a Gurindji man and a child protection worker turned ABC sports broadcaster, came to visit in 2008.

King wanted to talk about the level of violence in their community, but it was only when he described the scale of carnage across the whole country that they understood the gravity of the situation. "No more", they said, with quiet authority.

When King met other men in other communities, and told them of the encounter, the response was a willingness to act in concert and another two-word slogan: "Link up".

And they did. Before footy teams played each other, the players began linking arms in a demonstration of solidarity against the violence that was endemic in their communities. Usually, a period of relative calm ensued, until the resolve of perpetrators was washed away by grog or ganga or Ice or boredom or anger at the world.

So King embraced another idea to combat what Northern Territory coroner Greg Cavanagh has dubbed the "contagion" of domestic violence, one he borrowed from Reconciliation Australia, the body that encourages companies to develop their own reconciliation action plans to promote Indigenous employment and engagement.

Soon enough, sporting clubs in remote communities began crafting their own domestic violence action plans, many of them encouraging women to take on leadership positions in the clubs and introducing strict protocols for members who offended.

In some cases, a perpetrator would be stood down, required to submit to counselling and rehabilitation and then express his remorse and determination to be a better person in front of the entire club before being considered for a return.

The results were so promising that Josephine Cashman, a Worimi woman and a member of the Prime Minister's Indigenous Advisory Council, invited King to attend two roundtable discussions on violence she convened with the help of KPMG in May last year.

Tony Abbott had set up the council to advise his government on how to advance his three objectives in Aboriginal affairs: getting children to school, parents to work and making communities safe. Cashman was asked to chair the working group on community safety and was determined to give it her best shot.

"I've lived on Aboriginal communities where I've seen the violence, and I know there are so many people suffering," she says.

What emerged from the May discussions was a resolve to build a national campaign around the "No More" message, backed by the country's seven major sporting codes and in partnership with other agencies who were working hard to make a difference, Our Watch and White Ribbon Australia.

So what happened? Armed with a joint statement of intent from Our Watch and White Ribbon, and the in principle backing of all the codes, Cashman went to Abbott with a recommendation that the federal government assume the leadership role.

She proposed that "No More" be launched at Parliament House last November at an event attended by the high-profile sports stars who had agreed to be role models and that MPs would link arms in an unprecedented act of solidarity and resolve.

Abbott was toppled. So Cashman put her proposal to Malcolm Turnbull, a new Prime Minister facing a myriad of challenges, Bill Shorten, and no fewer than eight ministers. Aside from a commitment of support from Shorten, her efforts have so far come to nought.

This is why she and Marcia Langton, who played a critical support role in Cashman's efforts to build the "No More" coalition, were left perplexed at the way the council chair Warren Mundine chose to elevate the issue of family and community violence and sexual abuse this week.

Rather than lament the lack of support for those Aboriginal women with no national profile who have been leading the struggle against violence and sexual abuse for decades, Mundine targeted "Indigenous people, progressives, feminists and the media" for not wanting to talk about it.

On one level, his frustration was understandable. As he saw it, one episode of Four Corners on the Don Dale Detention Centre had triggered a royal commission, but countless atrocities in remote communities had failed to penetrate the national conscience.

But Mundine misfired, badly. The real targets of his ire should have been a political and justice system that has comprehensively failed to meet this and other challenges in Aboriginal affairs for decades.

It isn't silence that is the problem, but an abdication of national leadership that asserts itself in an inability to communicate with key players, rampant duplication, under-funding of good programs and, most of all, a failure to emphatically embrace recommendations based on empowering communities to take responsibility for the challenges they face.

Indigenous Affairs Minister Nigel Scullion recently hosted what he described as a "cracker" of a meeting with a coalition of Indigenous groups led by the National Congress of Australia's First Peoples.

It might be the start of a new engagement, with a commitment that relevant ministers and bureaucrats will hold workshops with stake-holders on several critical issues, including alarming levels of incarceration and community violence. We'll wait and see.

One certainty is that Cashman, who took her concerns about community violence to the United Nations Human Rights Council in June, is not giving up. No date has been set for the next meeting of Turnbull's advisory council, but Cashman will co-chair a tele-conference on Monday on the way forward with a group of Indigenous leaders that includes Langton, the APY Land's Andrea Mason and Sean Gordon, who heads the Darkinjung Aboriginal Land Council on the New South Wales' central coast.

Nor is Charlie King, who says the images of sexually abused toddlers and broken bodies from his days as a child protection officer are burned into his brain. The potential of "No More" is, he says, revealed at communities including Ramingining, with a population of 800 on the edge of the Arafura Swamp in Arnhem Land, where community violence has been reduced by 70 per cent.

This week King is off to Elcho Island, where the entire community will take part in a "No More" march on Wednesday. "Just imagine if the country's politicians linked arms across the floor of the Parliament to honour the call of those old Indigenous men who are voiceless," he says. "Just imagine what a message that would send."